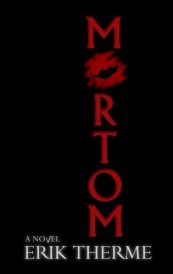 Mortom is the name of a small town where this interesting puzzle mystery takes place.  A thirty-three year old man. Craig, drowns in the lake outside of town.   He is the older cousin of brother and sister Andy and Kate Crowl.   The drowned man is the only child of a single mother, and they have lived in this small town all their lives, while Andy and Kate grew up in a town a couple of hours away.

They have had little to do with each other after childhood,  but strangely enough, Craig, never having married,  leaves everything to Andy in his will, and not to his mother.   Andy and Kate travel to the small town to deal with the paperwork of the estate, and Andy intends to have the local lawyer auction off what little furniture, etc. of the house and then sell the house.  It is estimated that the proceeds will barely cover the debts owed by Craig, so it is only a matter of signing off on the paperwork.

But wait — I smell a rat. —- literally, as do Craig and Kate when they enter the house for a quick look-see.  Phewwwwwie.   Craig is determined to find the source of the offensive odor, and finally locates it — a dead rat under the fridge.  Kate wants to just leave, but Andy is determined to pull it out and dispose of it and air out the house to get rid of the stink.  When he is finally able to get the rodent body out he discovers that it has a key in its mouth.  And even more,   a note!

And so begins the trail of clues that Andy hopes will lead to a treasure.  Perhaps Craig actually did have some money tucked away, and this game is his way of giving it to Andy.  But why Andy, and not his mother?  One clue leads to another, and along the way, Andy gets the idea that Craig’s death was not accidental, but a suicide.   Curiouser and curiouser.  And while we’re scratching our heads about all this, we must ask ourselves:  what single young guy with no money, no job, no nuthin’, makes a will?

And could his death have been not even suicide, but murder, and if murder, what could possibly be the motive?

If you like these kinds of twisty, mind puzzles, you will definitely enjoy this one.

Gotta go now.  I think I have a scavenger hunt on my agenda.  I sure hope it doesn’t include dead rodents.

2 comments on “MORTOM by Erik Therme”