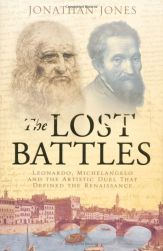 Jonathan Jones is one of Britain’s most acclaimed art historians, and is the art critic of The Guardian, so I am guessing he is well qualified to write a book about the rivalry between two of our greatest artists of all time.    We have  the master, Leonardo da Vinci, commissioned at age fifty-two by the Florentine Republic to paint a fresco depicting a famous military victory, the Battle of Anghiari,  on a wall of the Great Council Hall in the Palazzo Vecchio. And, with a commission from Machiavelli, Leonardo’s young rival, the thirty-year-old Michelangelo, working on the same wall, painting the Battle of Casina. .

But it isn’t just about that wall.  It is all about the history of the times, and about power and politics.  And you thought art just arose out of the ether, did ya?

The Renaissance is an important time in history because this culture gave birth to the modern individual. The Self striving for fulfillment is a Renaissance concept that still describes our lives.

Out of this time came the idea of ‘genius’ — of the artist as an enigmatic original — in which we still believe today.  Jones says that this resulted in titanic egos in collision.

A spectacle of sublime ambition and low cunning, of great minds and petty dislikes.  The newborn modern Self is about to take the stage.

Italy in the 1500’s was a fiercely competitive world, and also one obsessed with ‘honor’, and with the public image of a man and his family, which must not be sullied by insults or slights.  It was a culture which ritualized vendetta, which was practiced by aristocrats and artists alike.

This is a compelling and extremely readable book, one that gives the reader a look at these two artists as personalities in the context of their times.  It gave me a feel for what it might have been like realistically to live in that place in those times.