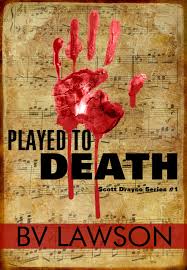 I love a good mystery, well-plotted and well-written.  And that is exactly what we have here.  It features Scott Drayco, former concert pianist until an arm injury sidelined his career, former FBI man until he couldn’t take the paperwork any more, and now a P.I. of sorts.  He seems to get paid in odd gifts, the latest being a decrepit and abandoned Opera House in a small town on Maryland’s Eastern Shore, the town long abandoned by the tourists as well.

He is contacted by a resident of the town to hire him, and Drayco agrees to meet the man in the deserted Opera House.  He figures he will take the opportunity while in the town to make arrangements to sell the place.  Renovating it seems out of the question, since his finances are in pretty sad shape.   However, finding his not-yet-client shot to death and lying on the stage of the old place puts a crimp in his plans,  as he feels he should stay to help the embattled local sheriff who is faced with a deputy roster shot down by the mumps.

Drayco’s contacts with the local populace reveal their desire to try to get the town back on the tourist map again, which might happen if the plans of a condo developer go through, which would entire the sale of waterfront property owned by the dead guy, and another piece owed by his rival.  The dead guy didn’t want to sell, the other guy does.

Draco also runs into the pervading sentiment of the townspeople for the old opera house, in which the famous pianist once played before WWII.  Upon her return to her native England, she had planned to return to the town, but was killed before that happened.

Another murder,  this time of the wife of the dead guy, puts the pressure on both the sheriff and Draco to resolve this situation, find the perp, and decide what to do about the opera house.