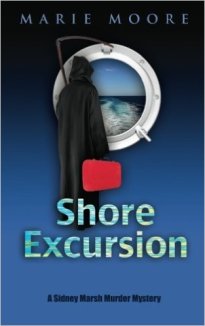 Alllllll aboaaaaarrrrddddd!  Oh, wait, no. that’s trains.  Bon voyage!!!!!  Yeah, that’s it.  This is a mystery featuring Sydney somebody-or-other as a travel agent for Itchy Feet Travel Agency, which makes me think more of fugal diseases of the toes rather than travel, but no matter.

The agency promotes a group called the High Steppers,  comprised mostly of Senior Citizens, with a few younger people in the mix, attracted by the low low price.

[Comprised of.  Is that right?  Should it be composed of? I always get those two mixed up.  Let me go check.  Be right back.   OK, I’m back.  This is what I learned:

Comprise means “to contain” as in “The house comprises seven rooms.” In other words, this house has or contains seven rooms. When you use “comprise,” you’re talking about all the parts that make up something.

Compose,” means “to make up,” as in “Many ethnic groups compose our nation.”

Rats.  I was wrong.  Learn something new every day.]

So, the High Steppers group is composed of mostly Senior Citizens.   Sydney likes to lead tours with them.  She finds them fun, and she gets to travel for free while doing so.  Her fav travel partner is Jay, fun and frolicy,  who takes life lightly.

This time it is a cruise from England to Norway, Denmark, Sweden and St. Petersburg, Russia.  Sounds good!  Sign me up!  Well, all except for the two murders of members of the group. I’ll take it without the side dish of murder.   But there is that devilishly handsome ship captain.

It is a cozy mystery, several nice twists, nothing too brain damaging, all in all a pleasant read.  And no, once again I did not solve the murders before Sydney.