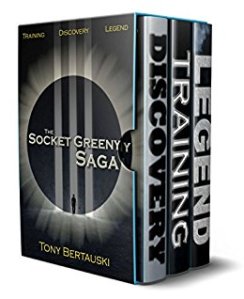 The Socket Greeny Saga.  Every time I thought of the book in my head, I referred to it as the Lemony Snicket book. Funny how certain language sounds lead you astray, down detours, and away from your terribly serious focus.  Have you read any of the A Series of Unfortunate Events books?  I have, but that was before I started the blog, so it is not included among the books I talk about.  Alas.

But not to fret!  We have another nifty YA in the person of Socket Greeny.  Yes, that is the name of the protagonist, and the ONLY reason I decided to read this book.  Because how can you not read a book titled Socket Greeny?   Although I often say I don’t read YA, the truth is I DO read YA, more than I care to admit to, but usually inadvertently, thinking it is something else.  That’s my story and I am sticking with it.

And yeah, it’s another version of the save the world trope, and the only one who can do it is the teenage principle of the book, but  really, would you rather read about a courageous, curious, interesting, intelligent adolescent, or about some dull-witted kid wasting his life on weed and weaseling out of school?   So I, having no patience with ne’er-do-wells, opt for the zippy teenager saving the world single handedly.

This is fantasy-sci fi.  Kind of Harry Potter meets – oh, I don’t know.  Let me just give you the official plot.  So much easier.

Socket Greeny is not normal.

His funny name and snow-white hair are the least of his problems. When a devious prank goes bad, Socket and his friends realize they are about to lose everything they’ve worked for in the alternate reality universe of virtualmode.

But when the data drain encroaches on Socket’s subconscious memories, some mysterious force erases the event entirely. Subtle clues suggest there’s more to him than he knows and will lead him to discover why his mom is always at work. And just how far from normal he is.

Work has always come first for Socket Greeny’s mother, ever since his father died. But when she shows him the inner workings of the Paladin Nation, he discovers why.

Paladins traverse the planet through wormholes to keep the world safe, but from what, they won’t say. Although his parents were not actually one of them, Socket is different. He soon finds himself in the center of controversy and betrayal when he’s anointed the Paladin Nation’s prodigy. He didn’t ask for the “blessing” of psychic powers and the ability to timeslice and he doesn’t want to be responsible for the world. He just wants to go home and back to school and be normal again.

And when the world is soon threatened and the Paladins are forced into the public eye, Socket discovers what his mother means. If he doesn’t embrace his true nature, life as we know it will change forever.

Paladin Nation.  Every time I read that, the song from the TV show kept popping into my head.  I think this book will appeal to people who are into role playing video games, because it has a lot to do with vitualworld, where they get into a major battle with the Bad Guy of the piece.  Socket and friends seem to incur some real life injuries in that battle, and I am not clear how that happened, because, like, virtual world is virtual, right?.  The Bad Guy reminded me of the Quintessential Enemy,  Harry Potter’s Voldemort — beautiful but deadly.

Anyway, OK, some folks love it, some did not.  I did not love it.  For me, it beat to death that old trope of teen saving the world, so it did not really engage me, although the writing was fine.  I wonder who are the principle target of these kinds of books?  Teen boys?  Pre-teen boys?  Teen or pre-teen girls?

This is a trilogy, but I think I have had enough of teenagers.  Frankly, I think the reason I don’t care for this particular trope is because all the teenagers I know couldn’t be trusted to feed the dog two nights in a row without being nagged, so the idea of any of them actually saving anything other than their leftover pizza is a pretty big stretch.