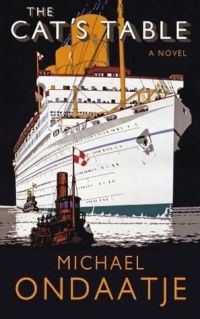 “A spellbinding story – by turns poignant and electrifying – about the magical, often forbidden, discoveries of childhood and a lifelong journey that begins unexpectedly with a spectacular sea voyage.

In the early 1950s, an eleven-year-old boy in Colombo, the largest city of Sri Lanka,  boards a ship bound for England. At mealtimes he is seated at the “cat’s table” – as far from the Captain’s Table as can be – with a ragtag group of “insignificant” adults and two other boys, Cassius and Ramadhin. As the ship makes its way across the Indian Ocean, through the Suez Canal, into the Mediterranean, the boys tumble from one adventure to another, bursting all over the place like freed mercury. But there are other diversions as well: one man talks with them about jazz and women, another opens the door to the world of literature. The narrator’s elusive, beautiful cousin Emily becomes his confidante, allowing him to see himself “with a distant eye” for the first time, and to feel the first stirring of desire. Another Cat’s Table denizen, the shadowy Miss Lasqueti, is perhaps more than what she seems. And very late every night, the boys spy on a shackled prisoner, his crime and his fate a galvanizing mystery that will haunt them forever.

As the narrative moves between the decks and holds of the ship and the boy’s adult years, it tells a spellbinding story – by turns poignant and electrifying – about the magical, often forbidden, discoveries of childhood and a lifelong journey that begins unexpectedly with a spectacular sea voyage. ”

Well, I found it neither spellbinding nor electrifying. Although the official plot description makes it sound like it is just chock full of adventure, it is a story in search of a plot, and the few events that do happen feel like Ondaatje realized that among all the musing and descriptions nothing was happening, so he stuck in some action stuff and called it good.

I found it somewhat boring and struggled to finish it, hoping for some big reveal at the end, but alas, that was not to be.

Remember Three Men in a Boat (to Say Nothing of the Dog)? Read about that book HERE.  This is Three Preteens in a Boat to say nothing about a dog which they smuggle on board who then bites a sick man in the throat, and then totally disappears.