I’ll give you one word:  cryptography.  Stop yawning.  This was a really great book and it was all about cryptography.  And gold.  And greed.  And geeks.  I’m telling you, geeks are the new jock.

The story follows two different groups of people, in two different eras.  The first group are the wildly intelligent mathematical genuses (genusii?) during the Second World War working to crack the cypher codes of Germany and Japan, plus a go getter Marine grunt.  The one military guy knows so much that he can never be sent into danger because he could be captured and made to Tell All.   There is also a Japanese military grunt, little better than a prisoner slave, working for the ….  And there’s also this guy who seems to be a monk or a priest or maybe not.   OK, that’s enough.

The other group are modern day startup hotshots, looking to create a data haven in the fictional Sultanate located in a northern chunk of the Philippines.  And that monk guy who shows up again.  How is that possible?

Our mathematical genus has thoughts about the military and modern warfare:  It isn’t all about loading shells and pulling triggers.  No large organization can kill Nips in any kind of systematic way without doing a nearly unbelievable amount of typing and filing.

The United States military is first and foremost an unfathomable network of typists and file clerks, secondarily a stupendous mechanism for moving stuff from one part of the world to another and last and least a fighting organization.

This is a complex and dense read, but compelling nonetheless because of the great characters, only one of whom seems to have any real moral compass.

It all seems divergent, but the lines begin to gradually come together and we see the connections become clear.

You will learn lots about cryptology (and yes, either cryptography or cryptology are correct), math, systems of encryption, and other cool things.  You will learn about mine building, big business and nothing about greed that you don’t already know.  You will learn some cool stuff about submarines and warfare and the military mind.

This was written in 1999 and doesn’t feel out of date.  Possibly some things about world banking systems have changed.  How would I know?  I have a piggy bank that holds all my worldly dinero.

This is a hard work to categorize.  Not really sci fi, not exactly alternate reality, not space opera.  It just is.  Suis generis.  Oh gimme break.  Go look it up.  Do I have to tell you everything?

Giddyap, cowboy!  Ya- hoo!  OK, enough of that.  Fun western novella staring Emmet Love, a gun slinger par excelance (is there any other kind?) who makes a living excorting ladies of the night from one town to another so they can upgrade their earnings by signing on with a different er, em, bordello.

This is the story of one such journey as our man escorts 5  young spoiled doves, plus a mail order bride from the East who pays him to take her to her prospective husband, and the trials and tribulations they encounter on their journey.

He has a best friend, a misshapen guy named Shrug who is more evidenced than seen, and who travels ahead of Emmet, leaving four stones as a guide placed east, west, north, south, and a fifth stone in the direction in which the party should continue to travel.  If there is no stone, it indicates possible danger, and they should stop and await developments.  Such developments might be Indians, robbers, fires, and who knows what else.

Makes my whining about how the restaurant on my travels didn’t have my favorite dessert, or how far it is to the next pristine rest stop seem a bit prissy.  OK, and spoiled.

Oh, and did I mention the witch.  Yeah.  Thought I forgot her.

Anyway, author Locke is quite prolific and has a number of books in the Emmet Love series, not to mention a whole lot of other series.

(I’m trying to remember the last western I read that wasn’t Bret Harte or Zane Gray.)

Chilling post apocalyptic novella about lethal drought conditions throughout the world in the year 2200, due, natch, to the greed and actions of humanity (yawn),  and the lives of the townspeople in a small place in the Nebraska plains.

It pits a teenage boy with a mysterious lady in white against the oil industry. Not really much new in the meta story, but nicely told.

The science is a bit shakey, and I think it is a YA read.  Not sure. I searched for an author page, and found zero zip nada.  I have run across this a lot.  Somebody writes a book, publishes it on Amazon, and doesn’t even bother setting up a free site on WordPress or someplace so they can talk about their work and themselves.  Oh well, not my problem.

I am calling it a YA unless and until somebody tells me different, because it is not very complex, and the main character is a teenager who seems to have more sense than the adults around him, a common trope in YA stories. 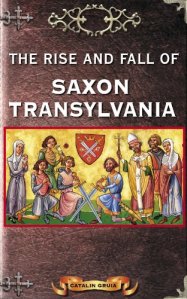 A delightful read, kind of history of Transylvania Lite.  A nicely condensed history of how the Saxon population ended up thriving in what is now Rumania, the Transylvania part.

Like managers with vacancies in the organizational chart, the first Hungarian kings invited guests from the West to develop a Transylvania that was in process of being conquered.

This was back in the 800’s.  First the Saxons were invited in and welcomed heartily.  They prospered and did well, then other conquering forces took over and threw them out.  They managed to come back and reintegrate and again got tossed out on their ears.  Today, there are very few remaining Saxon families.

The last part of the book has suggestions on  places to see wonderful Saxon villages, churches and other buildings.  Makes me want to take a trip to Transylvania, avoiding, of course, the vampires.

Catalin Gruia is a journalist for the National Geographic.  He has written The Rise and Fall of German Transylvania, and The Man They Killed on Christmas Day, (which is about Romanian Communist Dictator Nicolae Ceausescu), Vlad and the Vampire: The Eternal Double Life of Dracula,  plus a number of other books. 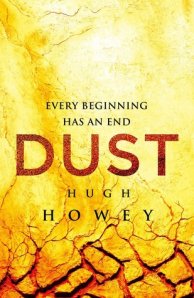 If you are a sci fi fan, you have heard of Wool, the story of the silos, by indie writer Hugh Howey.  You probably LOVED it.  Yeah, me, too.

Dust is the conclusion to the saga.  I should say the satisfying conclusion.  This whole story is packed with characters to root for and to hate.  Characters to wonder about.  And a whole world that strange as it is, is totally believable.

I’m not going to tell you how it all works out.  But I will give you a few quotes:

The folly of man — the folly of the blasted silos he had helped to build — this assumption that things needed saving.  They ought to have been left on their own, both people and the planet.  Mankind had the right to go extinct.  That what life did: it went extinct.

Heroes didn’t win.  The heroes were whoever happened to win.  History told their story — the dead didn’t say a word.

Even if we’d gone extinct, the world would’ve gone right on along without us.  Nature finds a way.

I haven’t been this involved, intrigued and yes, obsessed, by a long saga like this since Stephen King’s The Dark Tower.  The world created, the characters who inhabited that world, stay will me still.  As Mr. Howey writes:

This is not the end, of course.  Every story we read, every film we watch, continues on in our imaginations if we allow it.  Characters live another day.  They grow old and die.  New ones are born.  Challenges crop up and are dealt with.  Where a story ends is nothing more than a snapshot in time, a brief flash of emotion, a pause.  How and if it continues is up to us.

Well put.  And if you want to continue this Saga in your head, there is a burgeoning pile of fan fiction now available and I think most of it is here.

Now if you’ll excuse me, I have to go clean the windows.  Yeah.  Be right back.

This is a wonderful sci fi novella and part of the Killgrace series.

Killgrace is an alien.  And that is not his name, but one he assumed for human consumption.  He exists on radiation.  He is extremely grumpy, and intensely intelligent.

His partner, Susan, is also not what she claims.  She is an astrophysicist, claiming to be an anthropologist.

Here’s the deal:  These two are scientists unexpectedly stranded in a technological backwater who find, to their dismay, that conservation of energy and E=mc2 are in effect.  Most of their technology is useless. They have two ways to get home:  try and merge the reality they are in with the main causality, or rebuild a navigational database from readings taken across space and take a shortcut.  Co-operation is a problem: the world they came from was at war, and they aren’t on the same side — or are even the same species.

In this episode, they come to a US starship trying to rescue two ‘creatures’ the size of a small planet from a black hole.  It is an interesting exploration of the physics, mechanics and creativity of folks faced with this problem.  Lots of physics in this, but my favorite lines is when one of the characters says, “There’s no gravity in space, right?”

Well, gravity sucks.  Good thing, or we would all fall off the planet.

There are nine novellas in this series, and I am definitely going to get some more of them, because I am a sucker (see what I did there?) for hard science sci fi.

Our buddy the doctor,  Gaius Petreius Ruso, and his lovely Tilla, whom he has now married, return to Britain in this fourth volume in the series.  You will recall that this is set in Roman-occupied Britain of the 800s.

He and Tilla stay with his friend Valens, who promises to find work for him.  Meanwhile, a job comes up for him to investigate the disappearance of the Tax Collector and his brother from a nearby town,  who disappeared with the tax money, leaving an extremely pregnant wife, who gives birth in Valens’ house, attended by Tilla the midwife.

The pregnant wife is the relative of a neighboring tribe who count Boudica, the Rebel Queen as their blood line.  Whew.  Cool stuff.

Well, as in any good mystery, we have treachery, deceit, murders, and political coverups.  So what’s new, right?  Sounds just like today.

Boudica, AD 60 or 61) was queen of the British Iceni tribe, a Celtic tribe who led an uprising against the occupying forces of the Roman Empire.

Boudica’s husband Prasutagus was ruler of the Iceni tribe, who had ruled as a nominally independent ally of Rome, and had left his kingdom jointly to his daughters and the  Roman  Emperor  in his will. However, when he died, his will was ignored  and the kingdom was annexed as if conquered. Boudica was flogged,  her daughters were raped, and Roman financiers called in their loans.

In AD 60 or 61, while the Roman governor was leading a campaign on the island of Anglesey off the northwest coast of  Wales, Boudica led the Iceni as well as the Trinovantes and others in revolt. They destroyed Camulodulum,  which is modern Colchester.

You can thank Wikipedia for that little explanation, which I lifted whole and entire from their page.  There’s lots more, like how she destroyed Londinium, and how the crisis caused the Emperor  Nero  to consider withdrawing all Roman forces from Britain, but Suetonius’ eventual victory over Boudica resecured Roman control of the province.

What Has Been Read Cannot Be Unread
Blog at WordPress.com.