The cover blurb says ‘A literary novel in sci fi clothing.’  Well, no.  Literary, ok, if you mean a smidge preachy and a bit lead-footed on the metaphoric racist aspect. Sci fi, not much.  More like sci fi light.  Set in Morocco in some kind of near future,  we do have harni, which are biological creations made to look like humans, although they are not, and are manufactured for specific tasks.  Kind of like DIY servants.  And we do have the process of jessing,  which is an implant that makes a person bonded to whoever pays for them…. buys them.   This is voluntary, kind of a guaranteed job program.

It leans heavily on the idea that harni aren’t ummm well people, and of course they are not.  So they are looked down upon, and looked upon as I guess we would look at robots.  So anyway, the protagonist,  Hariba, has herself jessed because she doesn’t know what else to do with herself.  Her widowed mother lives in the Nekropolis, the old graveyard with its mausoleums now used as housing by the poor and just-above-poor, containing shops and markets, just like a little city within a city.

At her employment, Hariba meets and falls in love with a male harni, a lovely hunk of manhood, and he falls in love with her, and they plan to run away together and find a way to get smuggled into Spain, where they will be given asylum and a new life.

I should have liked this much better than I did.  After all, it did have some interesting characters, and a fine action line, a plot where something happened next and next, etc, as plots should have, but really, I think I was underwhelmed because of possibly where I am in my own head at the mo, and the relentless undercurrent of moralizing throughout the story.  Lots of musing about what are feelings, and emotions, and reflections on what it means to be a human.  Ho, not to mention hum.  Was this supposed to be a disguised discussion of Islam, the Arab world’s treatment of women, or what?

This is not this author’s first rodeo, but I will probably not be searching out more of her books.  Like I said, the fault lies with me and my cranky world outlook these days. 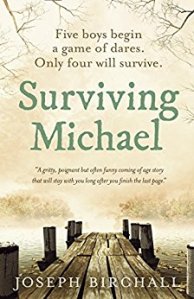 An interesting, if not compelling, story of four young boys, who at the end of their school days, have a game of dares, at a cliff’s edge.  Michael was reluctant to jump into the waters, and so one of the others gave him a helpful push.  Michael did not survive the jump, and the three remaining are left to deal with this in their lives.

We readers get to follow their lives, told in alternating voices of the three, until 15 years later, when they have their annual get-together on the date of Michael’s death, although that death and Michael are never mentioned.

It is interesting to see the path of each of their lives, without our caring overmuch about any of them.

Nice twist at the end, although it was telegraphed rather heavy-handedly, so the astute reader could see it coming.

One reviewer called it ‘unput downable’.  Yeah, well, I put it down several times.  Wasn’t sure I really wanted to pick it back up again.

A pleasant cozy mystery featuring a gormless young woman who can’t seem to get a job, whose P.I. uncle has offered her a pity hire as his assistant while she continues to job hunt.

Uncle falls off a ladder while cleaning gutters, and has to spend some time in the hospital and rehab, and sends his young assistant off on a couple of small errands for his business.  One was to deliver a message to another young woman who was a live-in assistant for an older wealthy woman.  When our gal arrives, she is met by the members of a book club devoted to mysteries, who are not able to rouse the older woman to open the door, and are worried.  Our gal, having few brains and apparently no scruples, uses one of their keys which they had been given, to enter the house, and after searching the house, finds the woman dead at the foot of a set of outside stairs.

Of course, after being repeatedly told not to involve herself in this business, she involves herself in the business, gets herself kidnapped, and later locked in a closet while the house is set on fire.

Yeah, I know.  Like I said, it was a pleasant read, not the best cozy I have ever read, yet, not the worst either.  Not sure why it was titled as it was, because really the book club were so peripheral to the story, but hey, ya gotta call them something, right?

McCourtney’s bio says she is  the award-winning and New York Times bestselling author of 48 Christian mysteries and romances.  OK.  Who knew?  Prolific, that’s for sure.

Another Dekker cozy mystery.  This series is pretty lightweight, perfect for gentle reading right before falling asleep.  It features the two tubbies, Lt. Decker and Sgt. Lou somebody or other.  Food obsessed, and semi retired, these two guys are the only homicide detectives on the Hillsdale force, so are retired until a dead body shows up.

However, now, Lou has a Wii, and is losing weight by the minute, much to Lt. Cy’s dismay, who is afraid he will lose his eating partner. Will Lou finally convince Cy to shed an ounce or two?  Stay tuned.

This murder occurs at an upscale apartment building, which offers meals either in the communal dining room or via dumb waiter, on a tray in their apartments.  Pretty nifty, right?

Well, an elderly resident is found with her face in her Cheerios, and the investigation is on to find out what happened.  It is not clear at first that she was murdered;  possibly it was poisoning, but how, at what point, could that have happened?

As with the other books in the series, not terribly hard on the mind, (although once again I had no idea of the murderer, but I plead inattention rather than lack of brain power.  That’s my story and I am sticking to it.)  These stories in the series are all easy-peasy, bright and breezy, with no bad words, sex scenes or even blood.  So don’t expect anything too heavy.  Just sweet bedtime reading.

A young Jewish-American writer journeys to the Ukraine to find out more about the life of his grandfather. Guided by Alex , an America-obsessed local, Jonathan ventures into the heartland of the Ukraine seeking to shed light on events that occurred to his grandfather during World War II. Joining Jonathan and Alex is Alex’s surly grandfather and a dog named Sammy Davis Jr. Jr.

The story is about Jonathan Safran Foer, curiously named the same as the actual author of the book . He is an aspiring writer in his early 20s who travels to Ukraine to try to find the small Jewish village of Trachimbrod where his grandfather grew up and to find the woman who helped him escape the Nazis during the war. He speaks no Ukrainian or Russian, and his only maps of the area are 60 years old, and so so he  needs a translator and a driver and somehow happens upon Alex, who has the most wonderful and creative English, sounding like a thesaurus.  Alexander is an Odessa native about his own age, and his blind grandfather, who acts as their driver (if you have read any modern Russian literature you will understand not to question this kind of thing) and their ‘seeing-eye’ bitch Sammy Davis Junior, Junior.

Half of the story is written by Alex, as letters to Jonathan. He writes in English in a broken idiolect that suggests computer translation gone awry His sections are humorous, and touching, as he takes side trips into  the nature of friendship, grief and regret, among other things.

The other half is written by the fictional Jonathan, and covers the history of the village from the day it got its name in 1791 until its destruction by the Nazis in 1941, by following the exploits of his ancestors. All of these sections have a very surreal quality. They jump around in time, different eras have glimpses into the past and future.

It is a story about what happens when you put an American and an Eastern European born in the Soviet era, in the same room and try to make them explain to one another why the other one thinks the way they do.

The over arching story of the ancestors, how the village was created, up until the arrival of the German Nazis is poignant, if a bit surreal,  and emotive.  But we come to love Alex, who wants so desperately to go to America and be an accountant, and is so proud of his English, with his enormous vocabulary.

I admit to mashing together selections from other reviews because I have entered the Age of Unabashed Laziness.  But I would have written every word had I felt up to it.  Cross my heart and hope to die.

This was Foer’s first novel, written when he was 25.   He later wrote Extremely Loud and Incredibly Close, which I commented on here. 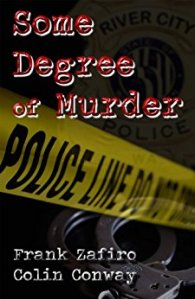 Very nice police procedural.  Does ‘very nice’ sound like damning with faint praise?  Maybe a little.  No, really, it was fine.  Not spectacular, but not awful, either.   It is the fifth in a series, and I have noticed that by the time you get to the fourth or fifth of a series,  you begin to lose some of the color of the initial volumes,  the back story has been told so many times the authors seem to get tired of reiterating it in condensed form, so what we have here is the mystery without much of the lives of the detectives.

Homicide detective John Tower has a couple of murders he is investigating.  Young teen girls, who don’t seem to have a connection, but with admirable digging, Detective John is able to come up with something to connect them, which makes it a serial murder, which he doesn’t want to reveal because that would bring in a team and he would lose control of the investigation.  It’s all about the micromanaging, kids.

Meanwhile, a … OK, let’s call a spade a shovel, here … a thug arrives in town to investigate one of the murders.  Turns out she is his daughter from a one night stand, a child he has never met, but knows only through photos her mother sends him.  He makes periodic payments for the girl.   Since he is a thug, a criminal, whose name maybe is Virgil, maybe not,  he will have no problems avenging the death of his daughter outside of the law.  When Detective Tower learns this man is in town and on the hunt, the race is on for Tower to find the killer first, so he can arrest him, and thus bring justice also for the other girl murdered.  Virgil doesn’t give a kreploch.  You know, Honey Badger don’t care.  Honey Badger don’t give a ……

Who will reach the killer first?  Who will kill who?  Whom?